Thinking about packing your bags and heading off to USA? Why not give West Hollywood a go? A real gem of a place, it’s one of the best spots in California for a holiday.

But before you set about purchasing your shiny new holiday wardrobe, you’ve got a few decisions to make – like when to go and where to stay. Most people head off to West Hollywood in September and stick around for 6 nights. Not many people visit in January, though, so it can be a good choice if you want to bag yourself a bargain. So, whatever your budget, we can certainly sort you a top-notch deal.

When weighing up your options, you might find it helpful to know that most holidaymakers opt to stay in 4-star accommodation, which will set you back around £103.78 a night. However, the cost is usually determined by the quality. If you’re feeling fancy and looking to treat yourself, the average five-star hotel costs around £234, although you might be able to get something closer to £193. Most four-star hotels in West Hollywood work out at £104 a night, with the cheapest option costing £68. But, if you’re willing to kick it at a three-star place, you probably won’t pay much more than £69 a night – and we can even find you somewhere for only £38.

However, if money’s not a huge concern, and you just want to stay somewhere that draws a crowd, The Garland, Montrose West Hollywood, Dunes Inn Sunset, Hollywood Downtowner and Loews Hollywood are the hotels that take top billing. 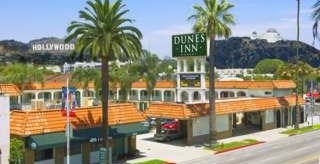 Check out our amazing blogs and get the lowdown on West Hollywood before you go!

5 Places for a Summer Getaway

The best thing about modern travel is that it’s never been easier or more convenient to plan a late getaway and grab a few days away somewhere exciting and new….

Throughout our very special 15th birthday month, we are sharing some inspiring travel content with 15 things in mind. Last week we looked at 15 amazing destinations around the world…

The newest addition to Disney’s Hollywood Studios, Toy Story Land, opens on 30th June 2018 and to celebrate we have a special giveaway for you! To be in with a…

Known as the birthplace of Western civilisation, Greece has an abundance of historical sights, average summer temperatures of between 25C and 30C, glorious beaches, great food and drink plus welcoming…

4 of the Best Holidays for Kids

Going on holiday with kids is a lot of fun, but you need to make sure there is plenty for them to do. While you might be happy to chill…

The tallest city in the world, offering one of the most spectacular skylines in the world, this city can easily be enjoyed in two days, making it an interesting alternative to a European…

Work out when the best time is to visit West Hollywood

Find the right flight for you to West Hollywood

12hrs 25mins
Looking for Hotel Only in West Hollywood ?