Thinking about packing your bags and heading off to United Kingdom? Why not give Putney a go? A real gem of a place, it’s one of the best spots in London for a holiday.

But before you set about purchasing your shiny new holiday wardrobe, you’ve got a few decisions to make – like when to go and where to stay. Most people head off to Putney in February and stick around for 2 nights. Not many people visit in December, though, so it can be a good choice if you want to bag yourself a bargain. So, whatever your budget, we can certainly sort you a top-notch deal.

When weighing up your options, you might find it helpful to know that most holidaymakers opt to stay in 3-star accommodation, which will set you back around £48.77 a night. However, the cost is usually determined by the quality. If you’re feeling fancy and looking to treat yourself, the average five-star hotel costs around £63, although you might be able to get something closer to £63. Most four-star hotels in Putney work out at £68 a night, with the cheapest option costing £54. But, if you’re willing to kick it at a three-star place, you probably won’t pay much more than £49 a night – and we can even find you somewhere for only £30.

However, if money’s not a huge concern, and you just want to stay somewhere that draws a crowd, Ibis Earls Court Hotel, DoubleTree by Hilton Hotel London Chelsea, La Reserve Hotel, Travelodge Battersea Hotel and Crowne Plaza London - Battersea are the hotels that take top billing.

Now the hotel chat’s out the way, you’ve gotta figure out your flights. A lot of our customers like flying into London Gatwick, London Stansted and London Heathrow – but if you’re looking for the most affordable airport, London City wears that crown.

Browse a cracking selection of the most popular hotels in Putney

Chelsea
8.1
(based on 60 reviews)
Hotel ideal for our needs. Clean room and general areas. Very helpful staff. Breakfast was excellent and bar area very pleasant. We would be happy to recommend this value for money hotel and we will certainly be booking again in the near future.
Peter from Rotherham checked in Fri 21 Jun 2019
Room Price from
£41
(per person per night)
View More 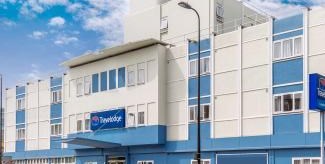 Work out when the best time is to visit Putney

Find the right flight for you to Putney

1hr
Looking for Hotel Only in Putney ?