Looking to escape the 9-5 and head off somewhere a little more exciting for a while? We reckon you’ll be bowled over by La Bocca. Sitting pretty in Cote d'Azur, it’s one of our favourite places in France.

Most people tend to go to La Bocca for 4 days, and they particularly like jetting off in September. January has proved itself the least popular time to travel – but going in the low season does have some plus points, like littler crowds and bigger bargains.

Once you’ve decided when to go, you need to pick a place to stay. If you like taking your lead from others, you might find it interesting to know that most of our customers go for 4-star accommodation, which will set you back around £56.35 a night, while Residéal Premium Cannes, Kyriad Cannes La Bocca Hotel, Hôtel Barrière Le Gray D'Albion, Clarion Suites Cannes Croisette and Hotel Barriere Le Majestic Cannes reign supreme as the most-booked hotels in La Bocca.

But there’s no need to copy everyone else – we’ll sort you something that’s right for you. If it’s a three-star hotel you’re after, we can find you somewhere for as little as £10 a night, although most places are closer to £29. For a four-star room, you can expect to pay £56 a night, with the cheapest option being just £27. And if you’re looking to live a life of luxury, we’ve got some five-star places on our books, too. These average out about £150 a night – but, if you’re lucky, we might be able to source something for £73. 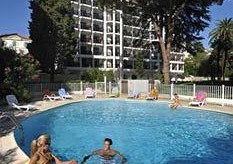 Cannes
8.9
(based on 18 reviews)
Really nice hotel in an excellent location. Near the sea and the high street shopping. Cafes and everything you need nearby. Nice rooms too, big enough for my friend and I. All the staff were wonderful too and very kind not to laugh at my efforts to speak French. The beach is close by. A lovely experience and I would go again and recommend it. We got a great price via T.R
Marcia from London checked in Mon 02 Sep 2019
Room Price from
£61
(per person per night)
View More

Cannes
8.6
(based on 8 reviews)
The hotel rooms were brilliant,and staff excellent and friendly,the rooms lovely after I asked for a free upgrade and was granted a room with view of pool and small balcony.
Gordon from Doncaster checked in Mon 02 Sep 2019
Room Price from
£34
(per person per night)
View More

Work out when the best time is to visit La Bocca

Find the right flight for you to La Bocca

2hrs 20mins
Looking for Hotel Only in La Bocca ?