This authentic Greek island on the eastern Aegean Sea lies just off the Turkish coast. Samos is one of the best known destinations, with its capital city Vathy being very popular. There are however, many quieter retreats to be found, with secluded bays and beaches to escape the crowds, rural villages where traditional life goes on unspoilt by the modernisation of society. You will be welcomed in to experience their culture and customs.

Popular areas to stay in Samos

Samos Town is the capital of the Greek Island of Samos, located in the Aegean Sea. The port town, which was built in the mid 18th Century, is sometimes referred to as Kato Vathy, its original name. Most of the houses are built around the bay, sandwiched between the sea and the mountains.

Samos Town has its own Blue Flag beach, Gagou, about 5 minutes’ walk east of the harbour.

About half an hour’s drive away you can visit the ancient site of Heraion, once the location of the biggest temple in Ancient Greece.

Room price from
£14
per person per night
View More

Birthplace of Greek mathematician and philosopher Pythagoras, Pythagorion is a hugely popular tourist spot, with ancient ruins, a historic harbour and town and paradise Blue Flag beaches. There are signs of Ancient Greece dotted around, such as the Temple of Hera, and magnificent aqueducts carved into the limestone rock.

There are lots of quirky craft workshops with traditional pottery and souvenirs for sale.

You’ll find rustic eateries positioned along the harbour and beaches.

As the home of Pythagoras, this town has lots to offer history buffs. There are ancient sites nearby, too.

Room price from
£11
per person per night
View More

This little fishing village is about 10 kilometres away from the capital, Samos Town, and offers visitors a real taste of traditional Greek Island life. With fishing boats tied up along the picturesque harbour walls, pebbly bays lined with taverns and bars, and groups of elderly men playing cards and dominos in cafés, this is exactly the kind of place that springs to mind when thinking of the Greek Islands.

Try the moussaka, it's simply divine.

Lemonakia Beach, one of Samos’s most famous sandy shores, is only 5 minutes’ drive away from here.

Follow pretty trails up Mount Karvouni and enjoy panoramic views over the island when you reach the top.

Room price from
£15
per person per night
View More

On the south west coast of Samos Island in the Aegean Sea, Votsalakia is in one of the most picturesque parts of the island. Despite this, the tourist foot fall is not as high as in other regions. It does have a lot to offer visitors, however, with a good selection of restaurants, bars and cafés, and nature trails that lead you up Mount Kerkis

A little off the touristy beaten track, this is a good place to come if you are looking to spend time together.

An expansive beach of pebbles and sand with plenty of taverns nearby.

The scenery behind the village is worth exploring. Hike up the mountain to appreciate the flora and fauna.

Room price from
£12
per person per night
View More

Just west of Pythagorion, the village of Ireon is home to what remains of one of the largest temples ever built in Ancient Greece. It was dedicated to the goddess Hera, who is said to have been born here. Now, just 1 of the original 155 pillars is still standing. After all the sightseeing, head to the cobbled town square to enjoy a traditional meal in one of the charming taverns.

These days, Ireon is a simple fishing village with sand and shingle beaches that are ideal for families.

The are quite a few taverns and bars serving traditional Greek cuisine.

Fans of Ancient Greek history will have a lot to keep them occupied here.

Room price from
£8
per person per night
View More

The currency used in Samos is the euro.

The language spoken in Samos is Greek.

2 hours ahead of UK Time

Browse a cracking selection of the most popular hotels in Samos

Pythagorion
7.3
(based on 2 reviews)
Room Price from
£11
(per person per night)
View More

Karlovassi
8.7
(based on 6 reviews)
Its perfect hotel With excellent food!!!!!
Anastasia from Koridallos checked in Sun 11 Aug 2019
Room Price from
£38
(per person per night)
View More 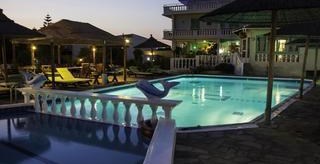 Half Board In Samos
View More

Self Catering In Samos
View More

Full Board In Samos
View More

Whether you're looking for a beach getaway or city break, Samos has something to offer every discerning traveller

Pleasant soft sand beach close to the resort of Kokkari that is well organised with facilities and activities.

A lovely pebbled beach, that is very popular in the summer with sunbeds, facilities and watersports available.

A large sandy beach that is unspoilt with cliffs to protect from the wind and a pine trees backdrop.

A quieter beach retreat away from the main tourist spots. It's located in a bay about 3 km from Agios Konstantinos.

On the hill above Pythagoria, the views alone are worth the trip, but take the time to also appreciate the old church.

Dedicated to the goddess of Hera, enjoy a guided tour of the temple remains and visitor centre.

A plethora of artefacts and archaeological finds are packed into this informative museum of Greek history and culture.

Marvellous ruins of an old Byzantine church reached via a forest walk and can be combined with the Potami Waterfalls.

A 20 minute trek along the Potami river, walk through the fish filled waters and reach the falls for a relaxing swim.

Learn how wine production has evolved in Greece with an informative tour and of course, sample some of region's finest.

Take a relaxing cruise around the coast of the island, maybe stopping off for a swim or snorkel.

Adventure seekers should sign up for a day of exploring the hills and mountains - suitable for all levels.

Food with a personal touch

At Balos Beach experience a unique dining experience as the chef asks your preferences and makes to order, with no menu.

The Old Town restaurants and tavernas do a range of traditional Greek dishes from Meze to Moussaka.

Usually served as a starter or appetiser but fairly filling. Prepared fresh off the boat at the marina restaurants.

Seen as a fast food treat in Greece and readily available, it is best enjoyed with Tzatziki (yogurt) sauce.

Situated right at the harbour. Relax and watch the boats come and go as the sun sets over the sea.

A vibrant cocktail bar at the marina with an eclectic music policy and great all round atmosphere.

A nice mixture of sport screens - with volume down - but the bonus of the great sea views for a chilled out setting.

Check out our amazing blogs and get the lowdown on Samos before you go!

The Mediterranean is home to some of the most popular destinations in the world for beach holidays thanks to its agreeable climate, fresh food and turquoise sea. But there’s more to the…

Known as the birthplace of Western civilisation, Greece has an abundance of historical sights, average summer temperatures of between 25C and 30C, glorious beaches, great food and drink plus welcoming…

Greece has always been a great destination for holidays, and despite recent news it still seems to be popular with tourists. Whilst there are hundreds of Greek islands there are…

Work out when the best time is to visit Samos

Find the right flight for you to Samos

Tsabou Beach
Looking for Hotel Only in Samos ?