Germany's capital city is a hub of creativity, culture and music, with contemporary street art in abundance, art galleries and museums everywhere you look and every kind of bar, nightclub and super club you can imagine, from pulsating techno clubs to alcohol free soulful dance nights. The Berlin Wall remains a staple in the city's history and there are landmarks and museums to explore the capital's divided past.

Popular areas to stay in Berlin

The second largest district of Berlin offers a mix of culture, nightlife and recreation areas. Prenzlauer Berg has a lively arts scene and wealth of bars surrounded by grand 19th Century architecture. The centre of Pankow and historic district of Weissensee are surrounded by an expansive rural area.

Watch the sunset from Weissensee beach and be swept up by the romance of Schönhausen Palace.

The Kulturbrauerei is a former industrial complex that has been transformed into a trendy area of bars, restaurants, theatres and a cinema.

See the Rykestrasse Synagogue and Bornholmer Brücke, where captured spies were exchanged during the Cold War.

Room price from
£22
per person per night
View More

A suburb of Berlin, Spreebogen offers a quieter alternative to staying in the city centre. It’s part of the business district and is located on the banks of the River Spree. The modern hotels are in a prime position overlooking the water. It takes about 20 minutes to get to the heart of the city by tram or bus.

Stay somewhere quiet overlooking the river and dine at one of the modern restaurants in the vicinity.

Cross the bridge to the Tiergarten, a huge urban park which is even bigger than Hyde Park. Boat trips also go from nearby.

The Mall of Berlin is a shiny new shopping centre close to Potsdamer Platz. It’s got everything from C&A to Armani.

Room price from
£29
per person per night
View More

The most commonly spoken language is German.

The currency used in Berlin is the euro.

Browse a cracking selection of the most popular hotels in Berlin

Mitte
8.1
(based on 583 reviews)
Great Hotel in a fabulous place. Location is ideal. Views from most rooms right over Berlin. Friendly efficient staff. Compact rooms with everything you really need.
Graeme from Ashington checked in Sat 02 Feb 2019
Room Price from
£30
(per person per night)
View More

Mitte
9.5
(based on 22 reviews)
Great hotel, very quiet, large comfortable bed, huge shower. One of the best breakfasts I have ever had in a hotel. Lots of choice, fresh every day, hot and cold food.
Yvonne from Cardiff checked in Mon 02 Dec 2019
Room Price from
£40
(per person per night)
View More 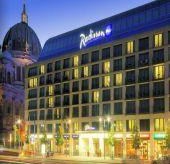 Mitte
9.0
(based on 154 reviews)
The service at the Radisson Blu was the best I have ever received in a hotel. Any request we made was met with genuine smiles. Also it was mine and my friend's birthdays while we were there and when we mentioned it to them they sent cakes to our rooms on both days.
Esther from London checked in Wed 02 Jan 2019
Room Price from
£55
(per person per night)
View More

Lichtenberg (Berlin)
9.0
(based on 55 reviews)
Great few days away, hotel excellent abit out but tram just outside, breakfast really good, bed comfy but pillows abit soft for me, Spa fab after a long day walking around and the service fantastic everyone very helpful. Would recommend.
Lisa from Wrecsam checked in Sun 12 Jan 2020
Room Price from
£33
(per person per night)
View More

Mitte
9.1
(based on 73 reviews)
Our family holiday was wonderful. The apartment or room was beautiful and stocked up perfect. The staff was very friendly and helpful especially Michel at the reception. Had lovely time
G from Tralee checked in Sun 17 Feb 2019
Room Price from
£32
(per person per night)
View More

Self Catering In Berlin

Half Board In Berlin

Full Board In Berlin

Whether you're looking for a beach getaway or city break, Berlin has something to offer every discerning traveller

The crossing between east and west Germany after the wall was built in 1961 by the German Democratic Republic.

One of the largest Jewish museums in Europe, you'll find fascinating multimedia exhibits in a contemporary structure.

Contemporary Fine Arts is a showcase of unusual international artworks and has been a tourism hotspot since 1992.

A harrowing and insightful memorial dedicated to the Jews who were murdered during World War II under Hitler's regime.

Go up the Fernsehturm Tower

At 368 meters this 1960s tower is Germany's tallest structure where you can enjoy breathtaking views from the top.

Germany’s oldest zoo is home to 16,000 animals and claims to have the broadest range of species in the world.

The East Side Gallery

Over a kilometre of 100 paintings cover what was once the Berlin Wall and is now the world’s longest open air gallery.

Germany's capital is a multicultural melting pot with cuisine to match, from Asian fusion to French fine dining.

An alternative to steak tartare, this unusual dish is raw, minced pork spiced with salt, pepper, garlic and caraway.

This techno super club is notoriously difficult to get into, but it's well worth the effort.

Soulful dance music, a fun crowd and cacao shakes are the order of Sunday evenings at the alcohol free club, Lucid.

This energetic area of Berlin is overflowing with bars, from chilled hipster haunts to bars playing pulsing techno.

A Cold War airline booking office is hidden beneath an apartment block, now one of Berlin's most sophisticated bars.

Check out our amazing blogs and get the lowdown on Berlin before you go!

12 Cities for a winter break in Europe

As wonderful as a summer holiday is, there’s something to be said for a winter city break, isn’t there? Strolling through beautiful streets while wrapped up warmly, diving into picture-perfect…

7 Signs You Need a Holiday

We all experience them, those everyday tell-tale moments when the penny drops and you realise you’re in need of a holiday. The feeling can creep up on you or be…

The Best Christmas Markets to Visit in Europe

Originating in Germany, Christmas markets have spread throughout Europe and now form a staple part of the festive season. Not only can you find special gifts for loved ones, but…

20 of the Best City Breaks for Couples

We love a good city break. Not only can they be really affordable and accessible, you can often experience the beating heart of a country. From capital cities like Madrid and…

Don’t panic if you still haven’t planned that all-important long haul holiday. A city break can be even more enjoyable in the summer months, meaning that you can enjoy a…

For the third year running, we’re thrilled to announce that the Travel Republic Hotel Awards is back! Travel Republic works with over 300,000 hotels, from boutique bungalows to sprawling resorts,…

Work out when the best time is to visit Berlin

More
1/2
Pankow
Pankow
Spreebogen
Looking for Hotel Only in Berlin ?