Stretching from the Neretva River all the way to Cape Ostro, this region of Croatia is truly spectacular. Its coastline is characterised by its sandy beaches and crystal clear oceans, overlooked by acres of lush pine forests, olive groves, and vineyards, making it the perfect location for a relaxing getaway. There is also plenty to explore, from Dubrovnik’s historic old town to the unique islands nearby.

Standing proud on Croatia’s southern tip, Dubrovnik has been dubbed the ‘Pearl of the Adriatic’ – and holidays here really do live up to the tourist-board hype. Seriously easy on the eye, its higgledy-piggledy alleyways are crammed with ancient architecture, buzzing restaurants and chic boutiques. The views – of the city’s terracotta roofs and also the sparkling coastline – are best enjoyed from atop the historic walls. Gazing down, you might get a sense of déjà vu. That’s because Dubrovnik doubled as King’s Landing in Game of Thrones and also took on a starring role in Star Wars: The Last Jedi. Savvy operators have even set up tours taking tourists around all the top filming locations.

It’s not just historic sites that Dubrovnik does well – it’s also got some pretty banging beaches in its arsenal. Some are sandy, others are of the shingle variety, and then there are those that mix and the match the two. But with so many to choose from, you’re sure to find one that suits. Whichever one you go for, you can’t help but be bowled over by just how clear the water is. This part of the Adriatic is a top choice for diving. Alternatively, if you prefer to keep your head above water, try your hand at kayaking or enjoy some other watersports instead.

Dubrovnik packs in more than a few ancient relics. Although a pesky earthquake came along and destroyed a lot of the old city back in 1667, that didn’t stop UNESCO from granting it World-Heritage Status. There are a bunch of churches and monasteries worth visiting, including the Franciscan Monastery, which has one of the oldest pharmacies in Europe tucked away inside. Gothic bell towers and Venetian townhouses add to the charm, and you can ogle it all with a ramble along the famous city walls.

With the Adriatic right on its doorstep, Dubrovnik really lends itself island hopping. A short ferry ride will take you to the delightfully undeveloped Elafiti islands. Widely considered some of the best in the region, they’ve got a real get-away-from-it-all vibe going on. Tree-topped Lokrum’s another option. Supposedly the island where Richard the Lionheart was shipwrecked, it’s got beaches, botanic gardens and an old monastery to boot. Or, if you don’t want to leave the mainland, there are other spots strung out along the Dalmatian Coast. There’s the pretty coastal resort of Cavtat or the dinky town of Slano with its top-notch walking trails.

Room price from
£13
per person per night
View More

Known as Little Dubrovnik by the locals, Korcula Island may be small, but it's big on natural beauty, with some of the finest beaches the country has to offer. The beaches are a mix of sand and pebbles, and all are lapped by some of the most dazzlingly blue waters you'll ever see.

Take a romantic walk around the charming town centre, which is made up of medieval squares, churches and traditional houses.

Many of the beaches here are accessible only by boat, meaning it's more than likely you'll be able to beat the crowds.

Room price from
£19
per person per night
View More

The most commonly spoken language is Croatian.

The currency used in Dubrovnik Riviera is the kuna.

Cavtat
8.5
(based on 265 reviews)
This is a really great hotel overlooking Cavtat habour. Rooms well equipped and clean. Indoor and outdoor pools have plenty of sunbeds. Excellent buffet breakfast and you can sit out on the terrace weather permitting.
Keith from Sutton Coldfield checked in Tue 03 Sep 2019
Room Price from
£34
(per person per night)
View More Cavtat
8.3
(based on 217 reviews)
Fabulous hotel and holiday. Hotel is situated in fantastic location, short walk away from all the restaurants, main town etc. Room was spectacular, superior room sea view with balcony and worth paying that bit more.
Mary from Margate checked in Fri 11 Oct 2019
Room Price from
£29
(per person per night)
View More 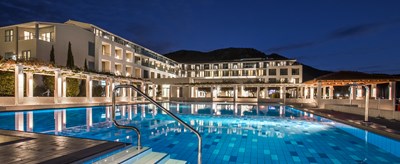 Slano
8.9
(based on 28 reviews)
hotel is in a great position next to beach but beach is stone and so is the edge of the water so shoes are a must , this its only downfall. staff are great. next to the main coast road but not a lot of noise. meals are buffet style but a great choice on offer . drinks are extra in the evening
Anthony from Teddington checked in Sat 31 Aug 2019
Room Price from
£36
(per person per night)
View More

Dubrovnik
8.7
(based on 210 reviews)
Hotel was amazing. We were given a couples massage as it was our second time staying in the hotel, all staff were lovely and went above and beyond to make sure we got the most enjoyment from our stay
Jake from Kilcoole checked in Tue 22 Oct 2019
Room Price from
£21
(per person per night)
View More

Dubrovnik
8.9
(based on 53 reviews)
Absolutely fantastic hotel in a beautiful setting. Spotlessly clean, friendly and very helpful staff, terrific restaurants. Tbh, I really can't fault it (maybe the toiletries could be better but that's me being INCREDIBLY picky!).
Matthew from Haywards Heath checked in Wed 21 Aug 2019
Room Price from
£36
(per person per night)
View More

Whether you're looking for a beach getaway or city break, Dubrovnik Riviera has something to offer every discerning traveller

With stunning views of the Dubrovnik Bridge and Elafiti Isles, this beach offers everything from water polo to discos.

The perfect romantic spot, this unique beach is up on the rocks, and is only accessible through Dubrovnik's city walls.

With activities from watersports to night time entertainment, this beautiful beach is not to be missed.

Quieter than other Riviera beaches, but no less impressive. Relax under the shade of the coast's many olive trees.

Examine this cemetery's intricate sculptures and to enjoy far reaching views of Cavtat harbour below.

Head to Banje for a taste of Croatian tradition with regular performances of this unique, 200 year old dance.

Take a tour of Dubrovnik

Discover the secrets of Dubrovnik’s old town, from its fascinating history to its role in the Game of Thrones series.

Ride along Cavtat's long coastline, exploring the area's array of stunning hidden coves and bays along the way.

Explore the thick pine forests and relax by the stunning saltwater lakes on this breathtaking island.

Perfect for a first visit, scale the city's 2km wall for breathtaking views of the ocean and the old town below.

Take a guided kayak tour around this remarkable island, or stop off to visit its monastery and meet the local peacocks.

The Riviera is dotted with excellent restaurants serving fresh fish. Enjoy it Croatian style, with lemon and olive oil.

For foodies who yearn for the finest seafood, try this remarkable Croatian dish, made using squid ink.

Influenced by Italy, the pasta dishes of Croatia are delicious. Their specialities include the potato based gnocchi.

Try one of the incredible patisseries. The kremsnita (a vanilla and custard cake) is not to be missed.

Enjoy a chilled out atmosphere and smooth sounds at one of this famous jazz bar's regular music nights.

With its club nights and beach side location, it’s easy to see why this club is popular with the rich and famous.

Ideal for those after a livelier getaway, this busy beach bar has nightly DJ sets and regular foam parties.

This romantic waterfront bar offers an impressive range of wines, including many sourced from Croatian vineyards.

Check out our amazing blogs and get the lowdown on Dubrovnik Riviera before you go!

Get ahead with next year’s travel plans with these summer holiday ideas. From laidback beach days in the Sunshine State to family fun in the Algarve, be inspired to go…

If you’re still undecided about where to go on holiday next, don’t worry – here are 10 of the best holiday destinations to consider if you’re planning some time away…

Don’t panic if you still haven’t planned that all-important long haul holiday. A city break can be even more enjoyable in the summer months, meaning that you can enjoy a…

Croatia on a Budget

Croatia has crept onto the radar in the last decade, fast becoming one of the most popular Eastern European countries. Only a few hours from the UK, its position on…

Croatia has grown in popularity over the last decade, especially for UK travellers, and the economy is booming. Great for couples and families alike, it offers long hot summers, stunning…

A Guide To Enjoying Football On Holiday [Infographic]

Jetting off on holiday during the World Cup and don’t want to miss any of the action? Don’t panic – you might be away from home but you can still…

Work out when the best time is to visit Dubrovnik Riviera

Find the right flight for you to Dubrovnik Riviera

Lapad beach
Looking for Hotel Only in Dubrovnik Riviera ?